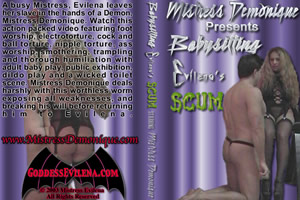 A busy Mistress, Evilena leaves her slave in the hands of a Demon. Watch as Mistress Demonique torments, punishes and abuses Evilena’s scum. First she makes him clean her bathroom with his toothbrush. Once he’s done, Demonique puts him to work tongue cleaning her sexy platform heels. Watch the scum gag swallowing her 7 1/2" long heels before Mistress crushes him beneath her stockinged feet. Then Demonique straps the slave to her cross and whips him into shape. You will feel his suffering as she begins to shock him. However, Demonique wants him to experience more intense pain so she hangs him upside down and binds his cock and balls. Mistress spins him around using the rope around his balls before the real torture begins. You will see the scum jerk and writhe in agony as Demonique shocks his cock and balls. When Mistress Demonique finally lets him down, he is dizzy, disoriented, and in a state of semi consiousness.
After leaving the scum on her floor for a few hours, Mistress Demonique returns wearing a sexy mesh skirt and in the mood to have her ass worshipped. He is ordered to quickly kiss her ass in between every diamond on her skit. After failing to worship her ass to her satisfaction, Demonique furthers his humiliation by putting him in a diper and having him play with baby toys on her floor. Afterwards, she pulls the diaper off of him and spanks him over her knee. When she finishes her spanking, Demonique places flogs his cock and then fits him him a cock cage. Demonique leads this scum outside onto the streets of Detroit by a leash attached to his cock cage publicly displaying his vulnerability.
After returning to her dungeon, the scum is strapped to a her horse and further humiliated as he is forced to put a condom on a large dildo with his lips and then give the dildo a deep blowjob. His ass is paddled before he finally let down. Then with the scum laying on the floor, she sits on his face and smothers him underneath her luscious ass. Mistress Demonique then decides to check the toilet that he cleaned so long ago. Finding it to be less than perfect, she grabs him by the hair and pulls him into the bathroom to finish the job with his tounge. Demonique then flushes his head in her toilet and orders him to keep his head in the water until Mistress Evilena returns.
Mistress Demonique physically punish and thoroughly humiliate this worthless worm exposing all weakness, and breaking his will before returning to Evilena.
Price: $30.00
Trailer
Available at GoddessEvilena.com